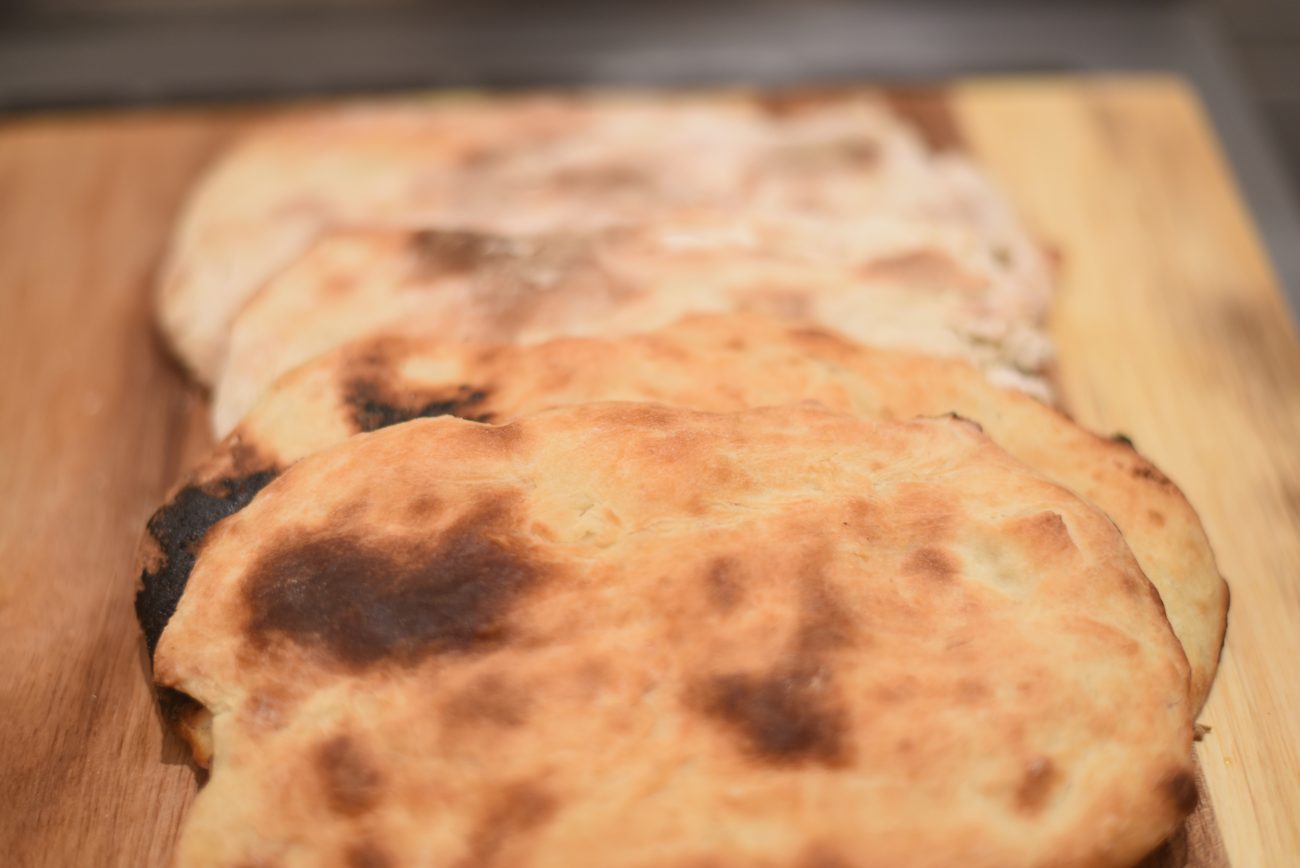 Whenever I throw an indian dinner I prepare the delicious indian naan bread as a side dish, it’s fast to make and does not need any special preparations.

This is a basic quick flatbread where all that’s needed is a quick starter dough made out of yeast, sugar and water, with one tablespoon of flour. The starter dough needs about 5 minutes until the bubbles appear and we can use add it to the flour.

The naan itself needs about 20 minutes to one hour in order for the dough to be ready for baking, it’s a fast dough and one of the basics of every indian cuisine dinner.

We believe Naan existed around 2500 years ago by the time yeast travelled all the way from Egypt (where were used to brew beers) and landed in India.

Todays Naan is believed to come from Persia, levanted breads were not common back then for the common population and were considered to be upper class and royal breads, yeast were not abundant and as such were restricted to the classes which were able to afford them.

Naan was first recorded in the 1300’s by the Persian poet Amir Kushrau as naan-e-tunuk (kind of a light bread) and naan-e-tanuri (cooked in a tandoor oven).

First step in Naan is generate a levanting agent, similar to a quick starter dough, we mix the sugar-yeas-water and a bit of the flour to create a yeast reaction, afterwards we mix the yeast and flour by hand and quick proof the dough for a maximum of 1 hour.

The dough is flexible, can be easily stretched and shaped into any form you desire, working with it is easy just stretch it by hand and place on a baking pan.

There are a few ways to bake the indian naan bread, the traditional way is the tandoor oven which is a brick, stone, or ceramic pot. The shape varies according to location but the idea is the same a charcoal or wood, fire source, which reaches a high internal temperature that can get to 1000°F/ 500°c , so baking time is very quick.

We try to imitate this action at home however home ovens can usually get as high as 500°F/ 250°c, so the closest we can get to the original conditions is setting the baking pan on the upper rack of the oven and setting the oven on grill mode to be as close as possible to heat source.

In many recipes the naan is made on an iron skillet and cooked from both sides for a few minutes or on direct heat on the gas stove, a method I found very good, but takes more time, so bottom line, go for the oven option, it will produce great effortless crunchy naan with soft texture.